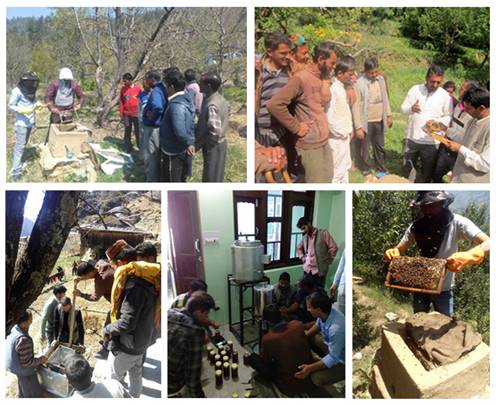 How Aromatic Plants Doubles The Incomes of Farmers?

EdTalk| New Delhi: Farmers in the Chamba district of Himachal Pradesh, keen for new livelihood (Incomes of Farmers) options to supplement  their income from traditional crops like maize, paddy, and wheat, have found a new lease of life.

Cultivation of aromatic plants has given them additional income. They have extracted essential oil from the improved variety of wild marigold (Tagetes minuta)that has been introduced, and the profit from wild marigold oil has doubled the incomes of farmers as compared to traditional maize, wheat and paddy crops.

The improvement in the fortune of the farmers has been brought about through interventions made by Society for Technology and Development (STD), Mandi Core Support group, SEED Division, DST. STD initiated cultivation and processing of aromatic plants (wild marigold, improved variety of IHBT) involving the farming community in technical collaboration with IHBT-CSIR, Palampur, in Parwai village, Bhatiyat Block in Chamba, an Aspirational District.

A self-help group (SHG) consisting of 40 farmers called Green Valley Kissan Sabha Parwai has been formed and linked to Himachal Gramin Bank, Parchhod, for further financial help. A distillation unit of 250 kg capacity was installed at Parwai village and farmers trained into agro-technology of wild marigold, extraction of oil, packing, and storage of oil started cultivating wild marigold and distilling oil from it. The extracted oil is being sold at Rs. 9500/kg and used in preparing perfumes and essences by pharmaceutical industries. The incomes of farmers which was around Rs. 40,000-50,000 per hectare from traditional crops have increased to about Rs. 1,00,000 per hectare by cultivation and extraction of wild marigold oil.

In another initiative, farmers have improved pollination by adopting mud hive beekeeping technology which has enhanced apple production resulting in an increase in the income of apple growers 1.25 times. Society for farmers Development, Talhar, District Mandi under TIME-LEARN programme of SEED Division, DST in technical collaboration with Dr. Y.S.Parmar UHF, Regional Horticultural Research Station (RHRS) Bajaura, introduced this technology for indigenous bees (Apis cerena) in Jawalapur village, Balichoki Block of Distt. Mandi H.P. A total of 45 farmers were involved, and 80 mud hives fabricated by trained farmers were put in their apple orchards, covering a total of 20 hectares in 6 villages.

Mud Hive Technology is a combination of wall hive & wooden hive technology, with a habitat like wall hive. It has inbuilt provision for putting frames inside the mud hive and more favorable conditions, especially temperature for bees throughout the year as compared to wooden hives.

The technology has brought about better colony growth & less swarming as compared to earlier used wooden boxes because of the favourable conditions they created. Introduction of indigenous bees, which can survive better in the apple growing areas, to replace the Italian bees through this technology has helped increase the average productivity of apple orchards by around 25 percent.

In existing mud hives, provisions for easy cleaning inside mud hive were introduced by putting aluminium sheets at the base of mud hive. This sheet is sealed with cow dung paste and can be removed for cleaning without opening the mud hive. The rooftop of mud hive was also made up of stone slate, which gives better protection and maintains favourable temperature inside mud hive. The technology has also helped in the extraction of honey in hygienic manner using honey extractors as in wooden boxes and introduced better management practices, such as feeding, inspection, union, and division of colonies as compared to traditional wall hives.

READ ALSO  How Internet or Technology did change the Standards of Studying ?

A common facility centre (CFC) has been established in the village, and farmers have been trained in processing and packing honey. They are also selling honey at Rs. 500-600/kg at the local level.

The need-based S&T interventions have helped farmers of Chamba, an aspirational district, and Mandi district of Himachal Pradesh taste new options of livelihood and dream for a better life.