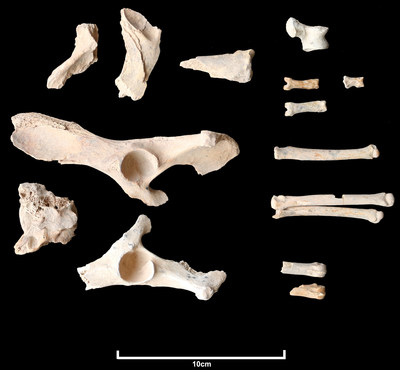 A team of archaeologists in north-west Saudi Arabia has uncovered the earliest evidence of dog domestication by the region’s ancient inhabitants.

The discovery came from one of the projects in the large-scale archaeological surveys and excavations of the region commissioned by the Royal Commission for AlUla (RCU).

The researchers found the dog’s bones in a burial site that is one of the earliest monumental tombs identified in Arabia, roughly contemporary with such tombs already dated further north in the Levant.

Evidence shows the earliest use of the tomb was circa 4300 BCE and received burials for at least 600 years during the Neolithic-Chalcolithic era – an indication that the inhabitants may have had a shared memory of people, places and the connection between them.

“What we are finding will revolutionize how we view periods like the Neolithic in the Middle East. To have that kind of memory, that people may have known for hundreds of years where their kin were buried – that’s unheard of in this period in this region,” said Melissa Kennedy, assistant director of the Aerial Archaeology in the Kingdom of Saudi Arabia (AAKSAU) – AlUla project.

“AlUla is at a point where we’re going to begin to realize how important it was to the development of mankind across the Middle East,” said the AAKSAU director, Hugh Thomas.

This is the earliest evidence of a domesticated dog in Arabia by a margin of circa 1,000 years.

The findings are being published in the Journal of Field Archaeology.

The project team, with Saudi and international members, focused its efforts on two above-ground burial sites dating to the 5th and 4th millennia BCE and located 130 kilometres apart, one in volcanic uplands and the other in arid badlands. The sites were above ground, which is unique for that period of Arabian history, and were positioned for maximum visibility.

The research team detected the sites by using satellite imagery and then by aerial photography from a helicopter. Ground fieldwork began in late 2018.

It was in the volcanic uplands site that 26 fragments of a single dog’s bones were found, alongside with bones from 11 humans – six adults, an adolescent and four children.

The dog’s bones showed signs of arthritis, which suggests the animal lived with the humans into its middle or old age.

After assembling the bones, the team then had to determine that they were from a dog and not from a similar animal such as a desert wolf.

The team’s zooarchaeologist, Laura Strolin, was able to show it was indeed a dog by analysing one bone in particular, from the animal’s left front leg. The breadth of this bone was 21.0 mm, which is in the range of other ancient Middle Eastern dogs. In comparison, the wolves of that time and place had a breadth of 24.7 to 26 mm for the same bone.

Rock art found in the region indicates that the Neolithic inhabitants used dogs when hunting ibex, wild asses and other animals.

The fieldwork uncovered other noteworthy artefacts, including a leaf-shaped mother-of-pearl pendant at the volcanic uplands site and a carnelian bead found at the arid badlands site.

The researchers expect more findings in future as a result of the massive survey from the air and on the ground, and multiple targeted excavations in the AlUla region undertaken by the AAKSAU and other teams, which are operating under the auspices of the Royal Commission for AlUla (RCU). The AAKSAU team is led by researchers from the University of Western Australia in Perth, Australia.

The researchers note that AlUla is a largely unexplored area located in a part of the world that has a fertile archaeological heritage of recognized global value.

“This article from RCU’s work at AlUla establishes benchmarks. There is much more to come as we reveal the depth and breadth of the area’s archaeological heritage,” said Rebecca Foote, Director of Archaeology and Cultural Heritage Research for RCU.

Other aspects of the intensive archaeological activity at AlUla will be revealed in the new Discovery Channel show Architects of Ancient Arabia, which debuts on March 31.

This reflects the commitment of the Royal Commission for AlUla to highlight the history and heritage of the county, and to transform AlUla into the largest living museum in the world, aligning with the objectives of the Saudi Vision 2030.

Other RCU development work
Over the past three years, RCU has conducted other development work with multiple partners around the world. This has included expanding capacity at AlUla airport by 300 percent and building Maraya, the award-winning multi-purpose conference and entertainment venue. The 500-seat Maraya, the world’s largest mirrored building, has hosted global signature events, such as the Hegra Conference of Nobel Laureates and the Winter at Tantora cultural festival, which featured artists including Andrea Bocelli and Lang Lang. Additionally, previously announced signature hospitality projects include the development of luxury resorts in partnership with Accor, Habitas, Aman and Jean Nouvel.