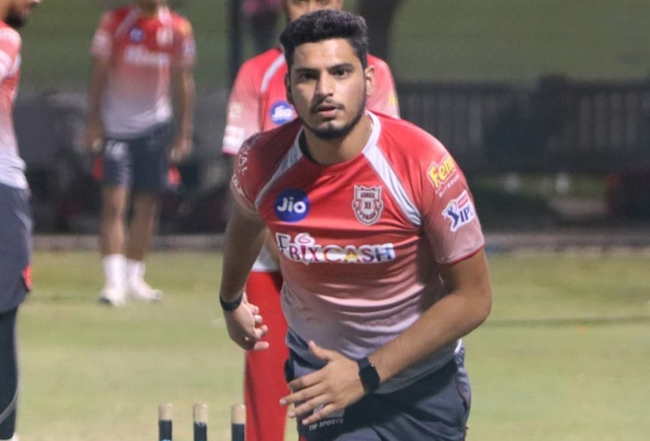 Hailing from Haryana, Vaibhav Arora is a son of a businessman who runs a dairy farm at Ambala Cantt. Young fast bowler, Vaibhav Arora from CU (Chandigarh University) Cricket Team is all set to make his debut in the 14th Edition of IPL-2021. A final year BA+B.Ed. student of Chandigarh University has been picked-up by Sharukh Khan team Kolkata Knight Riders (KKR) and is amongst the five young players bought during the recently held IPL auctions held at Chennai. The young medium pacer has been selected by KKR at a base price of Rs. 20 Lacs on the basis of his extraordinary performance in domestic cricket.

Coach of Chandigarh University cricket team and mentor of Vaibhav Arora, Ravi Verma said, “Vaibhav got selected due to his performance in Ranji Trophy where playing for Himachal Pradesh team he picked 29 wickets in 8 matches at an average of 3.6 wickets per match. He was amongst the top wicket-taking bowlers of the tournament.”

The medium-pacer continued to impress the selectors during the recently played Vijay Hazare tournament 2021 where he bagged 8 wickets in 5 matches with a hat-trick in his first match against Maharashtra, added Ravi Verma. With his excellent spell with the bowl, Vaibhav Arora also grabbed 10 wickets in 6 matches during Syed Mushtaq Ali Trophy 2021 that helped his team Himachal Pradesh reach the quarter-finals of the tournament.

READ ALSO  The New E-book 'But We Pray' by AiR, Helps Discover the True Meaning of Prayer

While sharing his stints as a member of Chandigarh University team, Coach Ravi Verma said, “Representing the University Team at AIU North-Zone Cricket Tournament, Vaibhav Arora took 14 wickets in just 4 matches. The medium-pacer scaled to the best of his performance during the match against Rampur University where he bagged 8 wickets conceding only 2 runs that helped Chandigarh University team to restrict the opposite team to a score of 7 all-out.” Although IPL-2021 happens to be the debut as a player for Vaibhav Arora, the medium-fast bowler has had his stints with Kings 11 Punjab as a net bowler and had traveled to Dubai for IPL-2020.

Chandigarh University, Chancellor Satnam Singh Sandhu congratulated Vaibhav Arora on his selection for IPL-2021. He further said, ” Chandigarh University has always been a hunting ground for budding sports-persons and to encourage the players, the university is offering Major Dhyan Chand Sports Scholarship under which more than 300 sports-persons are currently being offered 100% academic scholarship that includes free hostel and diet to the budding players.”

Advertisements
2021-03-16
Previous Post: PwC Survey: Pandemic has Accelerated Digital UpSkilling, But Key Groups still Miss Out
Next Post: HarperCollins is delighted to announce ‘In the Footsteps of Rama’ by Vikrant Pande & Neelesh Kulkarni