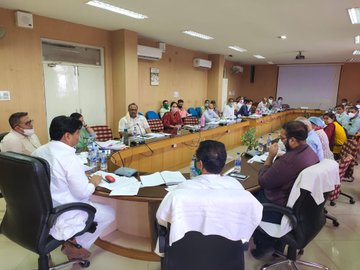 To adhere the goal of quality education, Officials must do time-bound work: Education Minister Rajasthan

Jaipur, Rajasthan: Education Minister Shri Govind Singh Dotasara has instructed the officers to adhere to the various targets implemented for quality education in a time bound manner. He clearly stated that the officer should act while being accountable and ensure that 100% of the financial goals are met. He made a comprehensive review of residential schools, teacher training, development of basic facilities in schools, establishment of Mahatma Gandhi English medium schools etc. under the annual financial plan of the Sampoorna Shiksha Abhiyan and said that strict action against officials who have been negligent in achieving the target. Action will be taken.

Shri Dotasara said in the education group on Tuesday that he was reviewing the overall education campaign. He reviewed the works being done in the annual plan one by one. In the meantime, he expressed displeasure over the achievement below the target in some of the schemes, saying that in the annual target scheme, the bestowed will not be tolerated at any stage. He made it clear that the intention of the state government is to effectively promote quality education in the state under overall education.

In the meeting, the education minister, while discussing the financial year action plan for overall education, said that proceedings are being taken to open the English medium Mahatma Gandhi School in 167 blocks of the state, where Swami Vivekananda Model School is not there. . He also stressed on the development of basic facilities in 76 recently opened schools.

He also inquired about the efforts being made for online education, project smile and material prepared for online education. He said that there is no harm in the education of students, it should be ensured at all levels. He said that apart from online teaching, a special action plan should also be prepared for online training of teachers. He also inquired about construction works of Kasturba Gandhi Balika Residential School, Vidyalayas, acceptance of posts, new additional classrooms and other basic facilities and said that work should be done in this regard as soon as possible as conditions are favorable.

Shri Dotasara said that preparations should also be kept on the plans to strengthen the existing schools by providing additional class rooms (study rooms), toilets, drinking water, repair fund, school improvement fund. Instructions were also given to provide intensive training to teachers online, to provide funds for the development of online teaching materials. He said that under “Samagra Shiksha Abhiyan”, special emphasis is also needed on girl education and needy children. He said that this is the time when we should also work hard to end the digital distance prevailing at all levels under the overall education campaign. A large number of education officers attended the meeting.