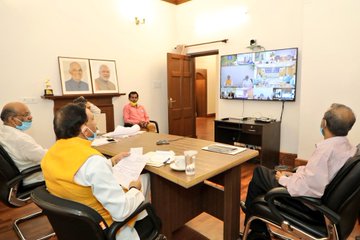 During the meeting Union Minister congratulated IISC Bangalore and other IIT’s which figuredin the top 100 in the recently released THE Asia rankings. He urged other institutes to emulate and compete with others to improve their rankings. Shri Nishank urged the institutions  work hard to make the dream of Prime Minister true to build a New India.

During the meeting the Ministersaid that a Project Management Unit should be established in MHRD for monitoring the works of the IOEs and HEFA in 15 days. Shri Nishank assured that a commitment letter from MHRD will be issued to various public institutions of IoEs that funds will be released for expenditure done as per the MOU of IoE. He also desired that construction activities have been open now and work may be expedited in IoEs which have stopped due to Covid-19.

Shri Nishank said that a vision document of three years may be prepared by each institute and sent to MHRD for compilation. He added that the work-related to research and innovations being done in various institutions can be obtained from various institutes and should be uploaded on YUKTI portal for wider publicity and dissemination.

The issues related to draft MOU and the inspection of private institutions were also discussed during the meeting.

2020-06-05
Previous Post: Personality tests for the remaining candidates of UPSC Exam 2019 to be held from 20th July
Next Post: “Safe online learning in the times of COVID-19” booklet launched by Shri Pokhriyal