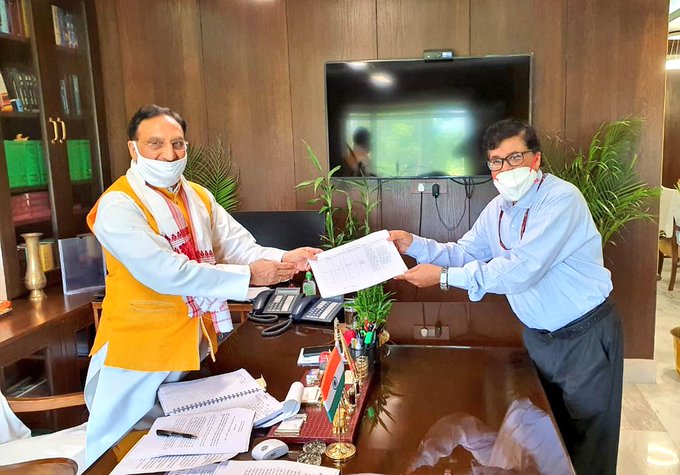 New Delhi: Union Human Resource Development Minister Shri Ramesh Pokhriyal ‘Nishank’ informed that Navodaya Vidyalaya Samiti has, on 15th May, 2020, successfully completed the exercise of shifting of over 3000 students who were staying in 173 Jawahar Navodaya Vidyalayas in various parts of the country during the lockdown period.

Jawahar Navodaya Vidyalayas are co-educational residential schools run by the Navodaya Vidyalaya Samiti, which is an Autonomous Organization under the Ministry of Human Resource Development, Department of School Education & Literacy.  The main objective of the Navodaya Vidyalayas is to provide good quality modern education including a strong component of culture, inculcation of values, awareness of the environment, adventure activities and physical education to the talented children predominantly from the rural areas without regard to their families’ socio-economic condition. At present, there are 661 sanctioned JNVs in various States and UTs of the country today in which over 2.60 lakhs   students are receiving quality education, free of cost.

One of the important features of the Navodaya Vidyalaya Scheme is the migration of students from a JNV located in a particular linguistic region to another JNV in a different linguistic region to promote understanding of the diversity and plurality of India’s culture and people.  The migration scheme has been in operation since long and has been instrumental in inculcating a feeling of national integration among the students.

In the backdrop of COVID-19 situation, the Navodaya Vidyalaya Samiti (NVS) had pre-poned its summer vacation schedule and the JNVs were closed w.e.f. 21.3.2020.

While majority of the students of the JNVs could travel to their respective residences (which are mostly   within the   district   boundaries) before the imposition of the nationwide lockdown, 3169 outstation students   who were staying in 173 JNVs, under the migration scheme and 12 students who were attending preparatory classes at Centre of Excellence, Pune for the JEE (Mains) exam could not travel to their residences.

With further extension of the lockdown period, these outstation students (including     girls) and mostly in the age group of 13 – 15 years, were increasingly becoming restless and home sick as they had not met their families for the past over 6 months.

The Samiti had been considering various possible options for shifting these migrated students to their homes at the earliest.  After several rounds of discussions with the Ministry of Home Affairs, the State and District Administrations and obtaining all required permissions, the Samiti commenced shifting of the students by road through specially arranged buses even during the lockdown period.  The shifting of students from various JNVs continued till 9th May, 2020.  The process culminated with the last contingent of the students reaching their destinations at Jhabua on 15th May, 2020.

The entire activity was planned and executed by the Navodaya Vidyalaya Samiti in a meticulous manner.  All arrangements for sanitation of the vehicles, providing masks, sanitizers as well as food and other consumables to the students and escorting teachers were also made.  No outside food was served to the students during the entire period of travel. Medical checkup of the students was also ensured at the commencement of the journey as well as on arrival at their respective destinations with the assistance of the District Administrations.

The longest journey in terms of distance travelled by the students was between JNV, Karnal (Haryana) and JNV, Tiruvanathapuram (Kerala) which involved a distance of 3060 kms,( passing through 7 States en route viz. Tamilnadu, Karnataka, Andhra Pradesh, Telanagana, Maharashtra, Madhya Pradesh and Uttar Pradesh) whereas the shortest  one was between JNV, Bolangir (Odisha) and  JNV, Annupur (MP) which involved a distance of just 420 kms.

Due to delays in getting requisite permissions, long distances involved and The journey that took the longest time – 5 days and 15 hours-  was to travel from JNV, Amethi (UP) to JNV, Alleppey (Kerala)- while the journey that was completed within the shortest time ( 9 hours and 30 minutes) was from JNV, Bolangir to JNV, Annupur.

The movement of the students was being closely monitored by the NVS and in the MHRD through progress reports on a day-to-day basis. All the 3169 students from 173 schools have safely reached their respective destinations without any issues in a 4.1 million  kilometer student activity which reflects the resolve of the disciplined officials of the Navodaya Vidyalaya Samiti as well as the State/District authorities who deserve to be lauded for their enthusiasm, commitment and untiring efforts.